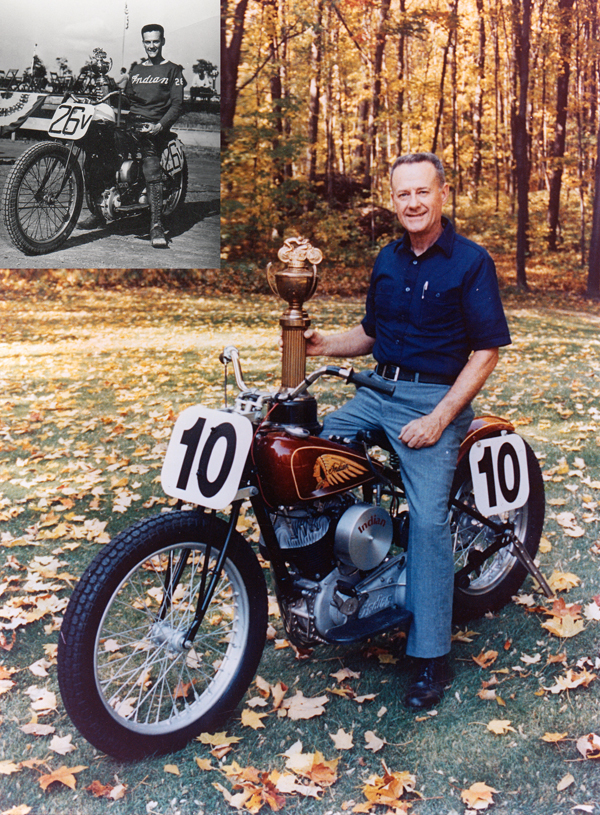 Jerry Callen was born on February 2nd, 1928 in Grand Rapids, Michigan. He grew up in Kalamazoo, and other than a two-year stint in the Army in Korea, he has spent his whole life in Michigan. His first motorcycle was a Harley 45. Two years later, his friend Art Hafer, a racer and skilled tuner, said “Jerry, if you’re going to ride, you might as well get paid for it!” It was the beginning of an exciting racing career.

Callen filed for his Novice license in 1948. His first competition was a hill climb. Later, he entered and won a time trial in Athens, Ohio. He was riding a 1937 Indian Chief. In this first racing effort, he was second fastest in his time trial, and consequently had to race with the Experts. He did quite well, placing 3rd in his heat and 2nd in the final! Callen used this motorcycle for time trial and short-track competition in 1948-49. His first dirt track race was at the track in Ionia, Michigan.

Callen’s first dirt track bike was a 1936 Indian Scout. He purchased this bike from a friend who broke his collarbone in 1949. Later, he bought a second pre-war Scout from Art Hafer. Hafer had raced the bike at Daytona. After falling down several times during the 1950 Daytona 200, Hafer decided to quit racing and sold the bike to Callen. The 1936-39 Indian Scouts were preferred for racing because they had a lighter frame than the bikes built after 1940. Callen used his first Scout for short track competition and use the Hafer Scout for mile and half-mile events.

From there, Callen went on to win enough points to advance to Amateur in 1949. He started the 1950 season as an Amateur but was able to get his white plate and Expert license before the 1950 season ended. During his 19 months as an Amateur, Callen was often moved up to the Expert racing because of his fast time trials. In his time as an Amateur, Callen took 73 first place wins, 20 seconds, and three thirds. After 1950, several motorcycle magazines and The Columbus Star (Ohio) rated him No. 1 Amateur nationally. Callen had nearly doubled the point totals of the other top Amateurs and had set track records at Galesburg and Grand Rapids, Michigan, Springfield, Illinois, and Montgomery, Alabama.

Soon after getting his Expert ticket, Callen was drafted by the Army. After basic training, he was assigned to the 1st Cavalry in Korea. After 21 months in combat, he was wounded and served the last four months in a hospital in Japan. He returned to racing in 1952. Because he had been so successful as an Amateur, and because he was now racing in a tougher league, the first months were a bit of a struggle. He had not been on a bike in two years, had been injured, and his racing skills were a bit rusty. He soon improved and went on to win many of the races he entered before it became impossible to keep his 1936 Sport Scout racer in top shape.

Jerry Callen’s most memorable races include the following:

The time trial at Wabash, Indiana. This was one of Callen’s first races. He was entered as a Novice, competing in two events. He did so well as a Novice that he was asked to race in the Amateur event. He rode his 1936 Sport Scout and won both the Novice and Amateur finals races.

In 1950, racing in the Springfield Mile as an Amateur, Callen set a track record in winning the time trials giving him the pole position. After leading Eggers for the first nine laps, he was passed in the 3rd turn of the 10th and final lap. He got even a few weeks later at the Milwaukee Mile. He led for the entire race and Eggers came in second, a full straight-away behind him. Callen sat up after the final turn, thus slowing down the bike before finishing. The official time, Emmet Moore, later told him that he was 100th of a second from besting the track record. Had he continued to hug his tank he would have established a new 10-mile national record that day.

Later in 1950, at the Charity Newsies race in Columbus, Ohio, Callen went down in the trial, and lost the best time trial to his brother-in-law Dick O’Leary, again by 100th of a second. He did best O’Leary in the heat race and went on to take the final event.

In Kenton, Ohio, shortly after renewing his Expert license after coming home from Korea, Callen was involved in a pile-up. Several riders were injured. Bobby Hill came out with a hole in his kneecap, Chet Dykgraaf lost his pants, and Callen ended up in a body cast.

Callen’s last ride was in 1958, racing his trusty 1936 Scout at the Tri-State Mile in Detroit. According to Dick Mann, Jerry Callen was the last rider to win a race on an Indian in an official AMA mile event.

Jerry Callen’s tuner was Art Hafer, a skilled dirt track and hill climber in the 1940’s, who later became one of the top tuners for Indian-mounted racers including Jerry Callen, LeRoy Ickes, and Indian Wrecking Crew member Earnie Beckman. His special skills included creating a different camshaft and valve setup and using other modified parts in the Indian racing engines.

In 2001, Callen entered the 1936 Sport Scout racer in the display at the Indian Centennial Celebration at Springfield, Massachusetts. The bike took first in Best Competition Machine and The People’s Choice categories.

After retiring from racing in 1958, Callen worked at a local machine shop, working with Art Hafer until he retired, and still operates a shop at his home. He went to restoration events for many years, and still follows racing enthusiastically. 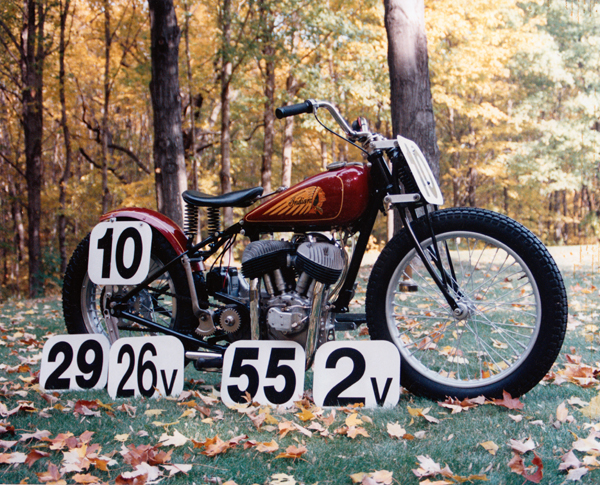